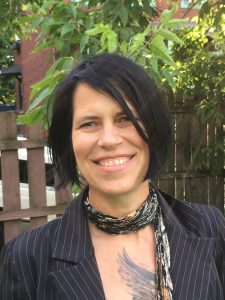 Cindy Crabb’s zine Doris was highly influential in the third wave feminist zine culture of the 90s.”I wanted to break open the secrets isolate us,” she writes, “the difficult secrets but also the small secret joys that keep us alive.”

Her memoirs show us how to remain tender in a threatening world while covering such topics as sexual assault, consent, abortion, addiction, queer identity, poverty, depression & the death of family members.

Cindy Crabb is the author of the zine collections Doris Encyclopedia (alternately titled Things That Help) and Doris Anthology. She is the editor of the book Learning Good Consent which has been translated in whole or parts into French, German, Spanish, Hebrew and Flemish. She and her sister conducted the interviews for the zines Masculinities: interviews and Filling the Void: interviews about quitting drinking.

Her essays appear in:

Cindy’s books and zines can be ordered online through AK PRESS, and Antiquated Futures and found in-person at many independent bookstores.